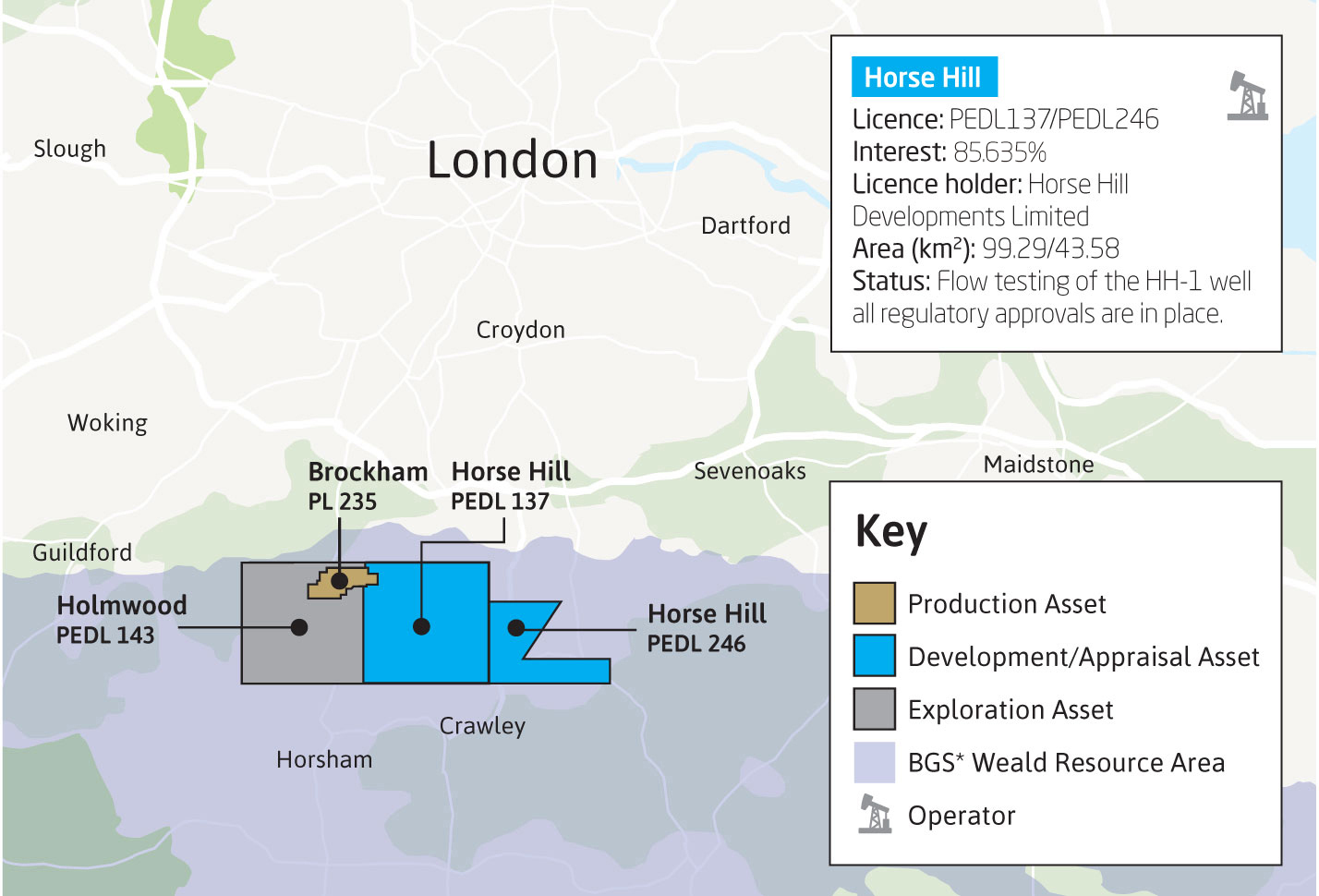 UKOG has an indirect interest of 31.2% in two Horse Hill area licences: PEDL137 and PEDL246. The operator of the licences is Horse Hill Developments Limited (HHDL) Click HERE to visit the HHDL website, in which UKOG has a 42% shareholding. Specific information relating to the Company’s ongoing evaluation of these assets can be found in the RNS section of the website.  HHDL has recently flow tested the Portland Sandstone and Kimmeridge Limestone intervals of the Horse Hill-1 (HH-1) oil discovery well.

The Company’s focus for future activities in the licences will be to carry out further extended well tests in the Kimmeridge Limestones and appraise the Portland oil discovery.

HH-1 is located within PEDL137, on the northern side of the Weald Basin near Gatwick Airport. HHDL is a special purpose company that owns a 65% participating interest and operatorship of PEDL137 and the adjacent PEDL246.

Portland Discovery
The HH-1 Portland Sandstone discovery lies within an approximately 100-ft gross thick conventional Jurassic Upper Portland sandstone reservoir, within a 6km by 3km Late Cimmerian age tilted fault block structure and trap, as defined by 2D seismic. The crest of the Upper Portland oil discovery lies at approximately 1760ft true vertical depth subsea and most likely extends over a mapped maximum areal closure of approximately 2000 acres. The Upper Portland reservoir is productive at the nearby Brockham field, some 9km NNW, in which UKOG has an indirect interest of 3.6%, by virtue of UKOG’s 6% shareholding in Angus Energy.

A CPR conducted by Xodus in June 2015 indicates a Best estimate or P50 stock tank oil initially in place (STOIIP) of 21 million barrels (MMbbl) (Table 1). The OIP hydrocarbon volumes estimated should not be considered as either Contingent or Prospective Resources or Reserves.

Table 1: Xodus’ Estimation of Gross STOIIP for the Portland Sandstone

Nutech’s considerable global knowledge base and play library indicates that the Horse Hill Upper Jurassic rock sequence is potentially analogous to known oil productive hybrid reservoir sections of the Bakken of the US Williston Basin, the Wolfcamp, Bone Springs, Clearfork, Spraberry, and Dean Formations in the US Permian Basin and the Bazhenov Formation of West Siberia.

Further recent investigations also indicate that the Kimmeridge Limestones are likely analogous to the Austin Chalk in terms of permeability characteristics and the Eagleford in terms of an oil saturated self-sourcing tight limestone and calcareous shale reservoir unit.

Nutech and Schlumberger have estimated STOIIP for the HH-1 tight Jurassic shale and limestone units, as shown in Tables 2 and 3. Analysis of the wells surrounding and offsetting the Horse Hill licence area and the Company’s other assets in the Weald Basin suggest that a highly significant petroleum resource exists in the basin. The HH-1 and licence area likely lies within the central “sweet spot” of Kimmeridge and Oxford Clay oil in place development.

Flow Testing
In February and March 2016, HHDL carried out flow testing of the Portland and Kimmeridge limestone intervals of the HH-1 discovery well.

On 21 March 2016, UKOG reported that the final total aggregate stable dry oil flow rate from the two Kimmeridge Limestones plus the overlying Portland Sandstone was 1688 bopd:

Conceptual Weald Basin Oil Development
UKOG, in conjunction with Xodus Group and specialist energy planning and environmental consultants Barton Willmore, has completed a conceptual field development study that investigates the siting of potential drilling and production facilities over the Horse Hill and wider Weald basin area of SE England that could be used to develop a Jurassic oil play in the event it is demonstrated to be technically and commercially feasible.

The prime objective of the study was to investigate at a conceptual level whether potential sites necessary to develop a significant Jurassic oil resource could be constructed with a minimal footprint and visual impact and realistically located in places that would provide minimal impact upon the Weald in order to protect the rural beauty and way of life of the area.

Please take a look at our project pages
Read More

Why is oil important?

Oil is an essential part of everyday life
Read More

There are currently no job vacancies at UK Oil & Gas PLC. We are aware of a number of fraudulent advertisements relating to careers at UKOG. Please ignore these advertisements.